I'm going to run another marathon on May 21st.  This will be my third, and it will also be my last.  People seem to think that is a funny thing to say, but I think that I've learned all I'm going to learn.

Three times is enough to call it a retirement right?

A Painful History of Marathons

My running credentials are what I consider average+.  I have a good build for running, and ran cross country in high school. I was never one  of the fast people on the team but I enjoyed running enough to keep doing it casually throughout college.

Eventually I got it in my head that if I was a serious runner, then I should run at least one marathon.  I also set a finishing goal, although I don't remember how I came up with it.  I settled on 4 hours, probably because that seemed to me like a serious running pace.  A four hour finish is a 9:09/mile pace, and slightly faster than the 'average' marathon pace for men recently: about 4 hours 16 minutes.

A friend encouraged me to sign up for a race ( San Diego Rock & Roll 2008 ), and like most things I just tried to figure out most of it myself.  I googled a few training programs, made a spreadsheet or something, and basically just did a ton of running.  I would time my runs and check my average mile pace to make sure that I was keeping it below a 9:09, but wasn't doing much other planning.

It was a minimalist approach for sure; something that hasn't changed much.

On race day I "hit the wall" hard between miles 18 and 20, mostly in the form of quad and foot cramps.  It was pretty miserable limping my way through the final 6 miles and my time was entirely blown.  I crossed the finish at 4:30:55.

If I had to guess what happened, it was probably a combination of dehydration and a lack of electrolytes that caused the cramping.  I think that I had two gel supplements during the race and I remember drinking water, but both might have been too late to be effective.

I was pretty disappointed by how badly I had miscalculated.  I thought that my training would have prepared me for the miles between 20 and 26, but it seemed like the cramping was beyond my control.    I was also not pleased that my finishing time was just slightly slower than Oprah Winfrey, so when the Rock n Roll San Diego 2009 came around, I signed up again.

I don't recall how the approach differed, but the outcome was basically the same.  I did improve by 4 minutes, but I don't think I even knew that in the moment. I was really frustrated to seemingly have hit the same impasse with cramping.  I decided that maybe I wasn't cut out for marathons, like the cramps were just inevitable at that mileage for my body.

The goal of 4 hours seemed more difficult than I had thought, especially considering the times I was putting up.  I forgot about marathons for awhile, but hadn't written them off entirely. 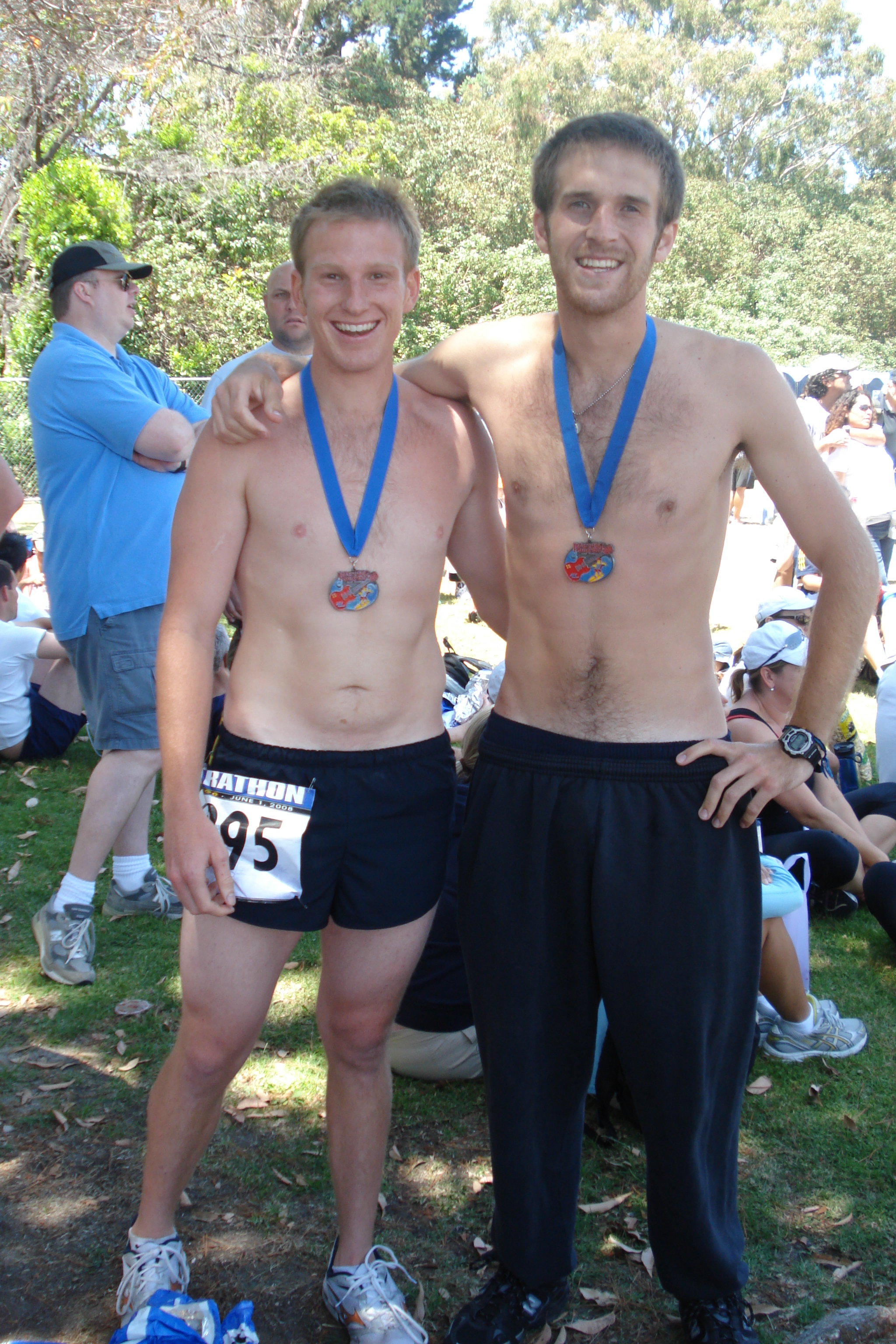 Fast-forward to the present; I am still friends with the same moron that got me to run a marathon in the first place.  He suggested that we run another one because he wants to retire from marathons also.  I was wildly optimistic about this idea, and for some reason had completely forgotten how demoralizing it is to fail at something which requires such a large commitment.

I told myself that this time would be different.  I would be prepared.

I'm here to report that I'm confident in my preparation and feel like I've set myself up for success.  It required a some evaluation and a few small tweaks, but I finally got myself on a pace that should bring me in below 4 hours.  Even if the last few miles do slow down a bit ...

What Have I Learned?

Marathons are a combination of many, many variables.  The key is to try to work out the perfect routine for yourself and your goals, and then stick to the plan.

So in the spirit of blogging more I thought I would share a few tips that helped meet my performance goals and maintain a healthy lifestyle throughout training.

I started to think a lot about my pace and how much it might slow down over the course of the race.  Some purists will tell you that you should be able to hold a consistent pace the whole race.  However, people like me who are 'casually' training for a race rarely even run the full mileage (26.2 miles) before race day.  I had an encouraging 20 mile training run, but admittedly the last few miles are a crap shoot.  Anything could happen.

Taking the data from my Garmin and plotting it with JSXGraph creates an extremely simple graph.  I realize now that it hardly takes a graph to understand this, but it was fun to make and compare against models. 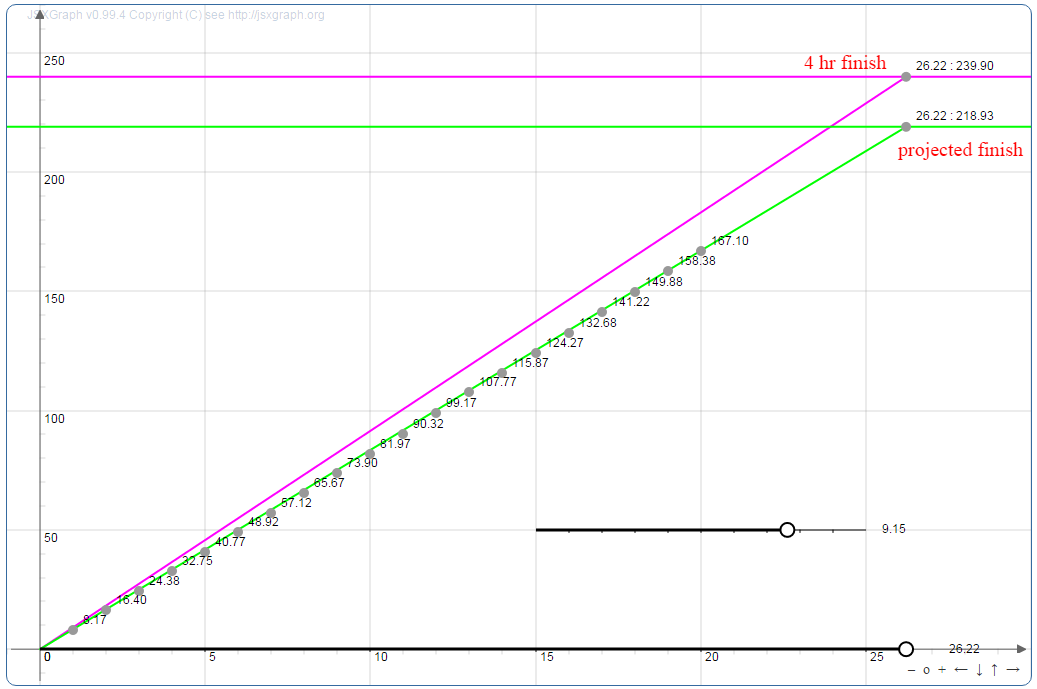 Some real splits from a 20 mile training run used to project an awesome finish?

Whether I achieve my goal of a sub-4 hour finish or not, I'll know that I gave it my best shot.   If nothing else it is a big accomplishment in preparation and time management.  I don't feel like running this much is a great use of my time, and I'm constantly hungry.  After the race, I think I'll tone it down to 5 mile runs a few times a week. 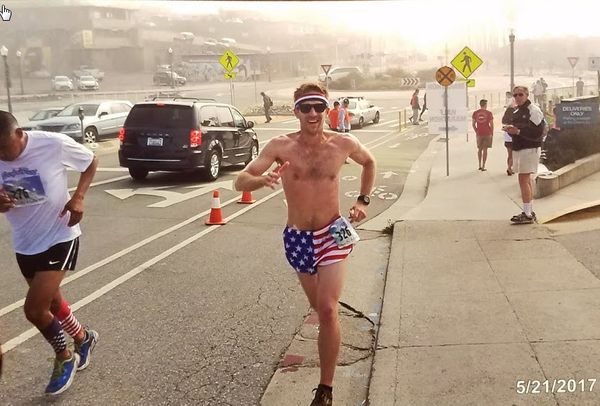 First and foremost, I shattered my goal of a sub-4 hour finish with my time of 3:42:12 . I was really pleased. My best guess was that I would

For the last two growing seasons, I've experimented with making time lapse videos of my plants sprouting.   It's an easy setup to leave in place for several weeks, and being